Details to follow.
Posted by neo-utopianism at 03:41 No comments:

Design and Media Communication Meeting Report
Development of NEOgate, Design Code, Visual Communication and Target Group Analysis
17. May 2011, New Cross, London
The human being has a “need” to accumulate and forget, as well as a need, whether simultaneous or successive, satisfaction and dissatisfaction, disequilibrium, discovery and creation, work and play, speech and silence.
______ Henri Lefebvre, Urban Revolution
After discussing Henri Lefebvre’s Urban Revolution we realized that we were particularly drawn to his idea of spatial dialectic. From this concept we gained a specific understanding of a possible production of space, which inspired our plan and visual communication for the NEOgate development. According to Lefebvre, space is not merely a social practice, but a product with economic value. With this in mind we started planning the development, which deliberately embodies spatial dialectics, in order to meet the desires and needs of a particular target group. The name of our target group ‘bohemian bourgeoisie’ already implies that their lifestyle and attitude is based on a dialectic approach.  Our next step was an analysis of our target group and its position in the economic market. During our phase of research we looked at upcoming and fashionable areas in London and noticed in how far creative communities can function as a catalysator for urban regeneration. Artists and other creatives are often forced to move into poorer areas of a city in order to afford accommodation and living. Creative communities have the potential to turn their local environments into new, exciting and desirable places of living. Particularly members of the ‘Bohemian Bourgeousie’ are attracted to artistic milieus, because they aspire to be seen as creative individuals. With the “Bobo’s” comes the capital, which raises the economic value of the area. Inspired by this observation we developed the NEOgate concept, which is based on the idea of the fabrication of an ‘artistic mileu’ to attract potential investors. One of our unique selling points would be that we are offering a dialectical space, which fulfills our target group’s demands. Through the Design Code, we present NEOgate as a development with a homogenous and yet heterogeneous character. One that is not so much informed by the history of the area but one that provides for an adventurous and safe u-topic experience. The masterplan will set out a vision; a vision where profit and luxury come first and where democracy, freedom and governance are a priority. A sustainable and thriving artist lead community will be demonstrated in all its manifestations built on five principles:
1.Economic Wealth
2. Focusing on image, consumerism, and lifestyle
3. Movement and Flow
4. Environment
5. Governance
During our research we focused on two different types of real estate development: NeoBankside and Heygate Real Estate. The word-play NEOgate highlights the idea that the area between Elephant and Castle and NeoBankside (Tate Modern) will form a new and exciting cultural quarter in South Side of the river Themes. The NEOgate logo refers to both the NeoBankside and Lefebvre’s work Urban Revolution. For the NEOgate’s visuals (which include language) come in form of artist’s impressions, we once more made use of Lefebvre’s spatial dialectics.
Posted by neo-utopianism at 19:57 No comments:


[i] Henri Lefebvre, The Production of Space, (first published 1974), Blackwell Publishing, USA, UK, Australia, 1991., p28
[ii] ibid., p225
[iii] ibid., p226
[iv] ibid., p26
[v] ibid.
[vi] ibid. p339 'Admittedly the architect, the promoter or even the occupier can compensate for the shortcomings of a given location by introducing signs: signs of status, signs of happiness, signs of 'lifestyle', and so on.'
[vii] ibid. p 375 'The space of this social practice becomes a space that sorts – a space that classifies in the service of a class.'
[viii] ‘NEOgate Master Regeneration Plan’, p11
[ix]  ibid., p220 'Monumental space offered each member of a society an image of that membership, an image of his or her social visage. It thus constituted a collective mirror more faithful than any personal one.'
[x] ibid., 'The monument thus effected a 'consensus', and this in the strongest sense of the term, rendering it practical and concrete.'
Posted by neo-utopianism at 10:15 No comments: 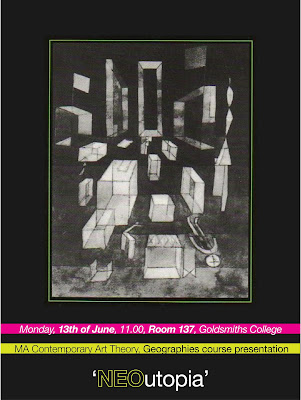 Posted by neo-utopianism at 16:10 No comments: 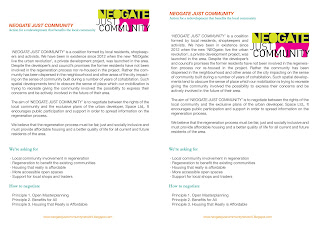 Posted by neo-utopianism at 16:07 No comments: